The Ben Franklin Racing Team is a collaborative effort lead by the University of Pennsylvania with Lehigh University and ATL @ Lockheed Martin to develop safe autonomous ground vehicles for urban navigation. The team has fielded an entry in the 2007 DARPA Urban Grand Challenge. Our car is a modified 2006 Toyota Prius named “Little Ben.”

On July 8, 2007 officials from DARPA came to Goodman Campus at Lehigh University to judge Little Ben. Ben Franklin Racing was one of 53 teams to be awarded a site visit after the original video submission. During this visit, Ben demonstrated his ability to obey precedence at busy intersections, pass double parked vehicles, as well as plan an optimal course while ensuring certain checkpoints were obtained. Ben’s performance lead to the team later being named a semi-finalist in the Urban Challenge.

The team was selected for participation in the Urban Challenge National Qualifying Event (NQE) at the former George Air Force Base in Victorville, California from October 26-31, 2007. A total of 35 teams participated in the qualification event in which cars were subjected to a winnowing process aimed at testing their skills, which included: parking, merging with other traffic vehicles and obeying traffic safety laws. Little Ben was one of only 6 vehicles to qualify early for the final race and was the first Track B robot to do so. Given his outstanding performance, he was awarded poll position four in the Urban Challenge Final Event (UFE).

Little Ben is a 2006 Toyota Prius, outfitted with sophisticated sensor suite, which includes:

Little Ben was controlled by a rack of 8 Mac-minis running Ubuntu Edgy.
His drive-by-wire actuation was installed by Electronic Mobility Controls (EMC). 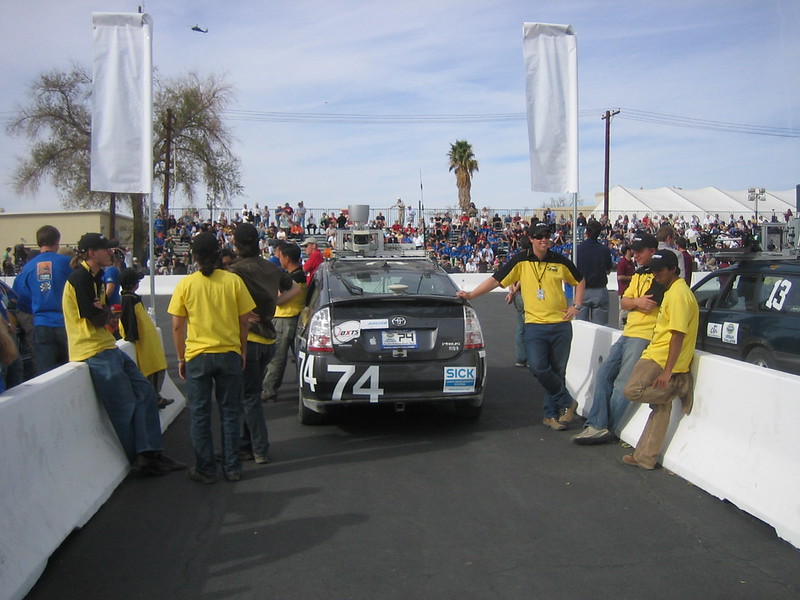